skip to main | skip to sidebar

ON MAY 20-21 AND 23rd WE RECEIVED AT OUR SCHOOL MIGUEL DE CERVANTES, ALL OUR FRIENDS FROM WALES, IRELAND, ITALY, POLAND AND SWEDEN.
IT WAS A HAPPY FEELING TO GET TO SEE ALL OF THEM AGAIN AND SAD AT THE SAME TIME BECAUSE WE KNEW THAT OUR SCHOOL RELATION WAS COMING TO AN END.
WE PREPARED SOME ATRACTIVES ACTIVITIES SO OUR PARTNERS COULD FEEL AT HOME.

ON THURSDAY MORNING AFTER THE RECEPTION WHERE OUR CHILDREN DANCED AND SANG SOME TRADITIONAL ANDALUSIAN SONGS, THEY HAD A VERY NICE BREAKFAST THAT PARENTS PREPARED FOR THEM. AND AFTER THAT THEY WENT TO SEE A DANCING HORSE SPECTACLE. BY THE TIME THEY CAME BACK WE HAD A VERY NICE LUNCH READY FOR THEM AT THE SCHOOL PATIO.
DURING THE AFTERNOON THEY HAD FREE TIME TO VISIT THE TOWN. AND AT NIGHT WE WENT TO AN OLD WINERY FOR DINNER. WE STARTED WITH A VENENCIA CONTEST, MANY TEACHERS GOT PRESENTS.
ON FRIDAY THE 21ST OUR CHILDREN WERE READY TO RECEIVE OUR FRIENDS. FIRST THE INFANT KIDS 3 TO 5 AND THEN SOME GROUPS OF PRIMARY. EVERY BODY ENJOYED THEMSELVES A LOT, DANCING AND ANSWERING VERY CLEVER QUESTIONS. ALL THE CLASSES HAD HANDMADE PRESENTS FOR OUR FRIENDS.

NEXT, WE HAD PREPARED A BULLRING FOR A BULL FIGHT . MANUEL MONTES A VERY ARTISTIC TEACHER MADE THE BULL HEAD, BODY AND ALSO THE BULLRING MATERIAL (BURLADERO). HE PERFORMED AS A BULL AS WELL. SOME OF THE CHILDREN WERE IN BULLFIGHTER CUSTOMS AND … THE SHOW STARTED WITH PASODOBLE MUSIC.
SOME OF OUR FRIENDS WERE INVITED TO TRY TO BULLFIGHT. THAT WAS A GREAT EXPERIENCE!
THEN OUR GIRLS DANCED THE MACARENA IN VERY ANDALUCIAN OUFITS HOLDING A FAN (ABANICO). AT THE END THE ENTIRE SCHOOL WAS DANCING; CHILDREN ALL AGES, TEACHERS… AND PARENTS.
AFTER THAT OUR ITALIAN PARTNERS COOKED SOME CATANIA SWEETS THAT WERE DELICIOUS. SOME CHILDREN HELPED THEM OUT TO GIVE THEM OLIVE SHAPES.
WERE THEY GOOD! MAMA MIA!
WE HADE A VERY NICE LUNCH IN A RESTAURANT WHERE EVER BODY SANG SONGS FROM THEIR COUNTRIES.
AT NIGHT DINNER AND A FLAMENCO SPECTACLE AND SOME ENDED UP IN A VERY NICE BAR TO HAVE SOME DRINKS AND DANCING.
ON SATURDAY THE 22ND JUST OUR FRIENDS FROM POLAND, SWEDEN AND IRELAND STAYED WITH US. THE OTHER COUNTRIES ALREADY LEFT.
ONLY THE POLISH PEOPLE WERE BRAVE ENOUGH TO GET UP EARLY IN THE MORNING SO WE TOOK THEM TO VISIT THE
ALCAZAR WITH AN INGLISH GUIDE AND THEN THE IRISH AND SWEDISH TEACHERS JOINED US TO HAVE A RIDE ON A TRAIN THROUGH THE TOWN AND VISIT A WINERY, WHERE WE WERE OFFERED SOME WINE TO TASTE.
WE HAD A VERY NICE LUNH AND WE BADE FAREWELL TO OUR FRIENDS. MAYBE SOME WHERE, SOME DAY WE MAY GET TO MEET AGAIN.
ONE THING IS TRUE, THIS CULTURAL EXCHANGE THAT WE HAVE EXPERIENCED WHILE GETTING TO KNOW ONE ANOTHER HAS MADE US BETTER CITIZENS OF THE EU. AND HAS HELPED US TO UNDERSTAND OUR DIFFERENCES. 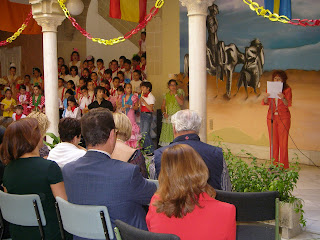 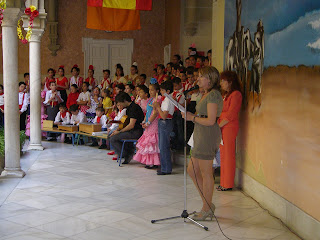 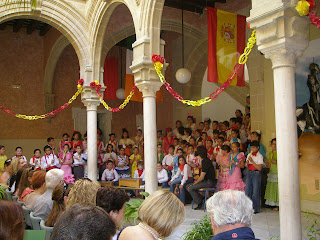 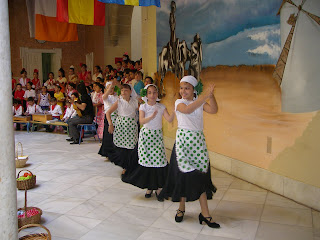 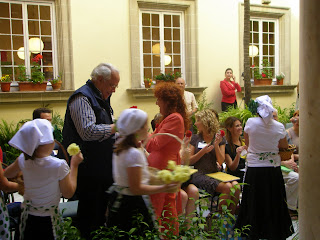 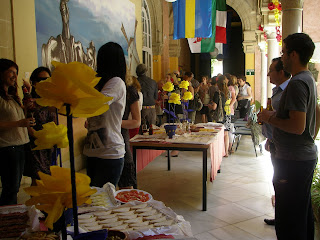 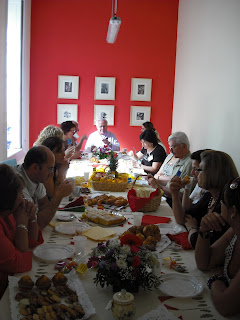 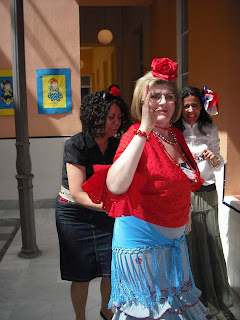 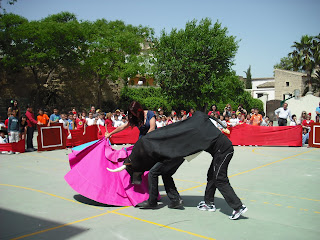 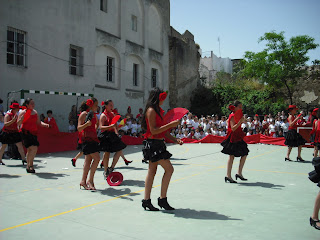 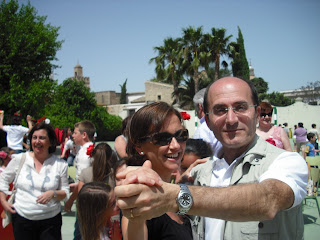 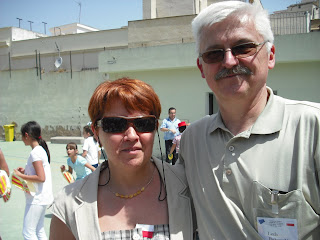 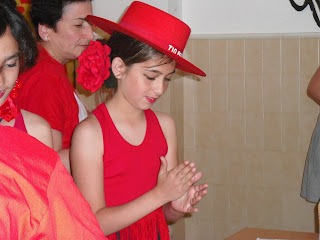 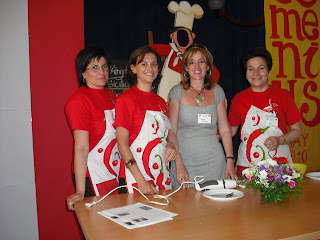 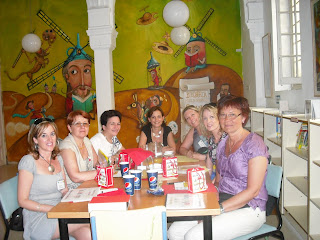 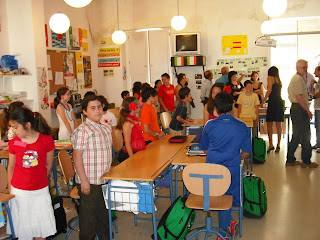 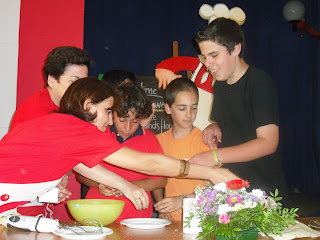 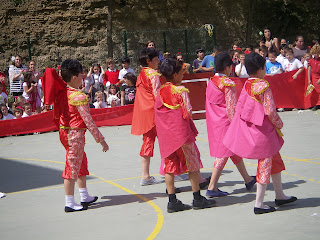 In June the children of the infant school in Viagrande celebrated the Swedish “Midsummer Festival”. The weather was wonderful, so boys and girls went out and danced together around a tree, wearing flower wreaths. They had a lot of fun! 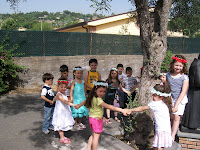 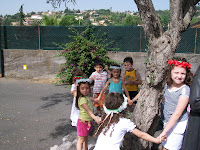 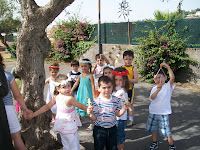 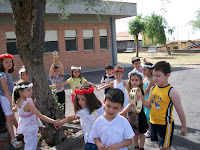 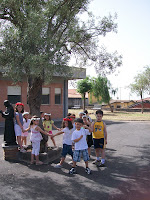 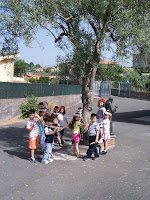 The pupils of the first class of primary school in Viagrande, aged six and seven, celebrated “Sobotki” festival, in June. They prepared a poster telling everything about this Polish tradition, first, then they made some wreaths with paper flowers. After this the true festival started: the girls threw the wreaths in the ground, (we don’t have many rivers in Sicily), then each boy took a wreath and gave a girl it.
It was really amusing!

During the świętojański period which is the culmination of the summer solstice (every year from 23 to 24) are cultivated in June Kashubian customs and rituals, as Midsummer Night celebration. The celebration takes place on the hills or the lakes. The magic of this holiday inspires our imagination, because who does not like to hear stories about witches?

Every year, the villagers gather around the fire to cleanse with fire their faults which is fulfilled with court by Kania. During the night of reconciliation and harmony girls put wreaths on the water and boys catch them, which spells the girls a quick marriage. Finding a fern flower also provides a variety of sensations, because in spite of the emotions during the search, it is not allowed for anyone to turn, or talk. Fortune will belong to the one who will find a fern flower that only blooms in the night.

Such habits and many other fortune-telling are nurtured today in Kashubia.

Children from Rokity also had this year, Sobotka, so we invite you to familiarize yourself with our comments. 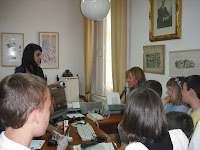 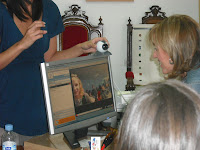 ON MAY THE 5TH OUR STUDENTS HAD THE LAST
VIDEOCONFERENCE WITH IRELAND.  IT WAS FUN TO HEAR THE IRISH KIDS SINGING AND TALKING TO THE SPANIARDS ABOUT HOBBIES, FOOD, SUBJECTS... AND WE HAD THE NICE CHANCE TO SEE AND TALK TO CLAIRE. 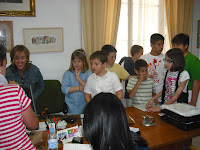 On the 29th April 2010 there was a last videoconference between the Italian
and the Polish students.
It was really nice to see and speak to David and his pupils.
The students introduced themselves and talked about their likes and
dislikes, their freetime activities, thei school, their holiday.
It was a nice experience for them all.
Arianna
Publicado por ALFIO (Sicily) en Tuesday, May 18, 2010 No comments:


THE FESTIVAL OF SAINT AGATHA

St. Agatha is Catania's patron saint and is celebrated in February from the 3rd to the 5th with one of the largest religious processions in Italy.

Agatha lived during the third century AD, when Sicily was under the Roman Empire, and was the daughter of an important rich local family. She was very religious and dedicated her life to God.

She became a martyr when she refused the advances of the Roman proconsul Quintian, who was in love with her. He arrested her. He thought that when faced with torture and possible death she would give in, but Agatha refused to abandon her faith, not even after being sent to prison and tortured in the attempt to change her mind.

One of the torture she was inflicted, was that she had her breast cut off.

It is said that after she returned to prison, the Apostle Peter appeared to her and healed her wounds. The following day she was subjected to new tortures, but an earthquake from Mount Etna shook the town and terrified the people.

Since that day, the saint protects the city and its inhabitants: just a year after her martyrdom, a violent eruption was miraculously stopped by holding up a veil that had belonged to the unfortunate girl. According to legend, the veil stopped the flow of lava.

People in Catania are particularly devoted to Saint Agatha. When the city is threatened by a possible eruption of the volcano Etna, they take the relics of Saint Agatha on the mountain in a procession asking for a miracle to stop the lava flow.

It is no wonder then that the city of Catania, at the foothills of Europe's largest volcano, dedicates its most important religious festivity to St. Agatha.

The procession begins on the 4th of February.

At dawn, after a special mass, the St. Agatha statue, which houses her relics, is placed on the ”fercolo”, a silver carriage and pulled by around 5,000 men.

The huge festival lasts for two days and two nights during which the procession goes around various areas of the city. More than a million people follow St. Agatha.

Many of them carry gigantic heavy candlesticks, some of which are wonderfully decorated. There is also a huge fireworks display at the end and you can buy sweets based on centuries-old recipes.

WALES, IRELAND, POLAND, SWEDEN, SICILY AND SPAIN WELCOME YOU TO OUR NEW BLOG. KEEP UPDATED ON WHAT WE ARE DOING AND LEARN FROM OTHERS CULTURES.